Regardless of which of the top 5 cruises for kids you choose, your children will be treated to a high seas voyage they will remember forever.

Competition is stiff in the cruise industry when it comes to attracting young passengers. This list of the top 5 cruises for kids clearly illustrates that when it comes to having fun at sea, the sky is the limit:

When it comes to listing the top 5 cruises for kids, Disney is a perennial favorite. The company is one of the only lines in the industry that caters specifically to families with young children. If you have youngsters, Disney Cruise Line has the absolute best set-up, facilities, dining schemes and programs for your family.

Some of the cruise line's outstanding features include:

Other unique features found only on Disney ships include a rotating dining system in which families can change restaurants every night, yet keep the same servers and tablemate. In addition, unlike its competitors, Disney Cruise Lines offers a bath and a half in most staterooms, which allows babies to bathe in an actual tub instead of a sink or shower. Disney also boasts an online service that allows passengers to pre-order baby supplies and have them delivered to their stateroom prior to setting sail.

SpongeBob, Dora and Diego. Oh my! If your kids are addicted to cable's Nickelodeon, then they will flip at the chance to cruise with their favorite cartoon characters. In early 2010, Norwegian Cruise Line announced a new partnership with Nickelodeon, which includes a host of special kid-centered cruises.

The all-kids network is anxious to cater to its youngest passengers and they intend to do so with "Nickelodeon at Sea" sailings chock-full of family-friendly amenities, such as:

In addition, Norwegian's Kids' Crew program will be infused with Nick-themed elements, including special appearances by the network's live talent and chances to participate in mock TV game shows. NCL hosts its Nick cruises on vessels that feature water play areas with slides and water squirters, including the new Norwegian Epic, which kicks thrills up a notch by offering three multi-story water slides and The Epic Plunge - the only slide of its kind at sea.

He's loud, proud and green, but don't blame seasickness. Rather, Shrek is taking to the sea for wild adventures of monstrous proportions. Royal Caribbean just inked a deal with DreamWorks Animation to provide its youngest fans with a chance to cruise with their favorite animated movie characters. In December 2010, Royal Caribbean debuted its new family-focused entertainment program featuring characters from DreamWorks blockbusters, including "Shrek," "Kung Fu Panda," "Madagascar," and "How to Train Your Dragon."

You and your kids can join Shrek, Donkey, Skipper and a host of other characters on a wild and crazy high seas voyage featuring:

In addition to the DreamWorks-themed events, Royal Caribbean also offers luxury accommodations for families of all sizes. The cruise line features interconnecting staterooms, multi-room family suites and a host of other in-cabin amenities designed to make cruising more comfortable for its youngest passengers.

He may not be a big, green monster or a cute mouse with large ears, but Fun Ship Freddy, whose head is shaped like the trademark Carnival ship funnel, makes kids smile nonetheless. Carnival Cruise Line's branded character is just one of the ways the company caters to kids on its line of "fun ships." 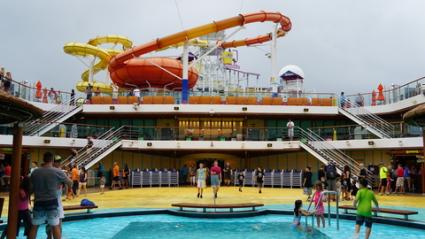 Carnival is well known for its kid-centric fleet of ships that feature a number of outstanding elements, including:

Another appealing aspect to young cruisers is Carnival's Adventure Ocean program. The kids' camp hosts a plethora of age appropriate activities from story time to toilet paper soccer, bingo and karaoke contests. Teens can also have a blast participating in toga parties and group skate session. In addition, Carnival is the only cruise line that lets kids ages 12 to 17 take part in shore excursions as separate groups. Teens go ashore under the leadership of a counselor and are able to explore the area with a group of their peers.

Princess Cruises has an excellent reputation for sailing ships designed with families in mind. Princess' expansive kiddie programs, facilities and accommodations for youngsters of all ages are top-notch. The cruise line also offers a host of unique activities for children including: