Taking a cruise is a relaxing vacation option. You only need to check in and unpack once, but you're able to visit multiple locations, enjoy a virtually all-inclusive experience and partake in a number of onboard activities. I went on a short cruise with Royal Caribbean a few years ago and had a mostly a positive experience.

Monarch of the Seas

I went on this trip with my then-girlfriend, now-wife, so this review represents the experience of traveling as a couple. Our particular itinerary aboard Monarch of the Seas took us round trip from Los Angeles, visiting San Diego and Catalina Island in California and Ensenada, Mexico.

The shuttle service from LAX to the cruise ship terminal in San Pedro took about 45 minutes. After checking in and receiving our guest cards, we boarded the ship to explore. Our luggage was delivered to our stateroom a short while later, at which point we had access to our room as well.

The stateroom itself was barely the width of three twin beds placed side-by-side and the very modest CRT television hung on the wall was disappointing at best. The room still offered everything that a passenger would need, but investing in a larger suite may be advisable for families or for individuals who desire more space. Newer ships, like Quantum of Seas, have the largest staterooms on average of any ship in the Royal Caribbean fleet. 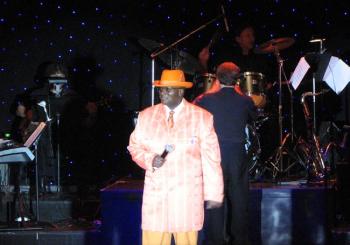 Every night, the main theater aboard Monarch of the Seas featured some sort of variety or production show. Just as Norwich notes about similar ship Explorer of the Seas, the nightly entertainment was "top heavy with comedians," combined with singers and dancers.

The cruise host on our trip reminded me of Bernie Mac, both in personality and appearance. He was always happy to meet and greet with passengers at any time during the trip. The shows were generally entertaining, but generic and formulaic in nature.

For our particular cruise, there was no option for a "drop-in" dinner in the dining rooms; we had to select either the early or the late seating. Also, there was no option to have a private table with just the two of us; the only table options were for four guest or for eight guests. Royal Caribbean cruise ships today may offer the more flexible dining options. 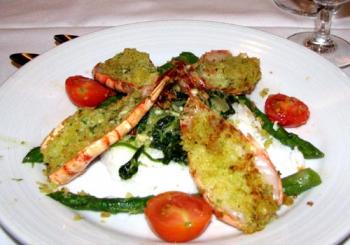 Seafood dinner on Monarch of the Seas

Menu items changed nightly with a good variety of dishes. The food was decent, on par with "decent banquet hall fare," a sentiment echoed on CruiseReviews.com in a review of sister ship Freedom of the Seas. The one formal night included more seafood options, like the butterflied shrimp shown here, than the other meals.

Service was friendly and attentive. Professional photographers take pictures of guests in their formal wear before and after dinner, selling the prints starting the next day.

In addition to the standard dining room, a premium steakhouse was available (with reservations) for an additional charge of around $25 to $30 per person. There is also the Windjammer buffet that is open for breakfast, lunch and dinner.

Other ships, like Rhapsody of the Seas, have even more dining options, including pan-Asian cuisine, specialty coffee, and the exclusive Chef's Table "set in a private area of the main restaurant," the last of which is an additional $95 per person.

Monarch of the Seas was outfitted with generously sized pools for swimming, as well as a climbing wall, fitness center and spa. The ship also has a modestly-sized casino that didn't appear to be particularly popular with guests. There are daily activities onboard the ship, but we spent most of our days enjoying the different sights and sounds of the ports of call.

As we were not traveling with any children, we didn't pay too much attention to the activities that they have geared toward younger cruisers. However, Royal Caribbean is named as one of the better cruises for kids with a range of fun activities, particularly with programs featuring characters from DreamWorks properties like Shrek and Kung Fu Panda.

The most important lesson to keep in mind when booking shore excursions is to research the pricing ahead of time. While docked in San Diego, we had the intention of going to the San Diego Zoo. This shore excursion included admission to the zoo, as well as transportation. However, a quick search on the Internet yielded a 2-for-1 coupon for regular admission and when we factored in the cost of a round-trip taxi, going to the zoo on our own was substantially cheaper than booking through Royal Caribbean. It also allowed for greater flexibility for time and seeing other parts of San Diego. 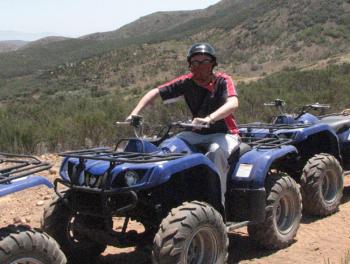 The one shore excursion we did book was an ATV tour from Ensenada, Mexico. We booked the tour that was a little later in the day, giving us time to explore Ensenada in the morning. The ATV tour started with a chartered bus ride to the ATV site, followed by an ATV tour of the desert and a visit to a local winery for a tasting. The tour was run by locals and was well-organized. This was easily one of the best highlights from the trip.

Monarch of the Seas is one of the older ships in the Royal Caribbean fleet. The decor definitely showed its age and the laughably small stateroom left a lot to be desired. That aside, the nightly entertainment was enjoyable, meals in the restaurant were above average, and the staff were all very friendly and courteous. Sailing on one of the newer Royal Caribbean cruise ships would likely be an even better experience with updated amenities, fun activities and a variety of entertainment options.