January 8, 2004 was a historical date in the cruise travel industry: Her Majesty the Queen of England officially christened the Queen Mary II, and the elegant ocean liner became an instant icon in the world of luxury ships.

About the Queen Mary II

The largest ship in the world when she made her maiden voyage from Southampton, England to Fort Lauderdale, Florida, the Queen Mary II, or QM2 is the flagship of the renowned Cunard Cruise Line fleet. Though her size has been surpassed by Royal Caribbean's Freedom of the Seas, she remains the largest true ocean liner (designed for transoceanic crossings). Cruise ships, on the other hand, are designed primarily for pleasure voyages that start and end at the same port.

Impressive in her numbers alone, the ship boasts:

The ship was named after the original Queen Mary, which served the Cunard line from 1936 to 1967, including a stint as a troop transport ship during World War II. While the QM2 is larger and more luxurious than her predecessor, she maintains the distinct sophistication of an elegant liner and proudly carries on the tradition of high-class voyages.

Sailing Aboard the Queen Mary II

The QM2 is a ship like no other. Her décor harkens back to the glory days of ocean liners, with rich woods and deep colors befitting her royal status. More than 300 original works of art create a spectacular collection valued at more than $5 million, and audio tours are available on board to educate curious passengers. The Queen Mary II also hosts the largest tapestry at sea, a spectacular rendition of the ship against the New York skyline that is displayed in the Brittania Restaurant.

More than three-quarters of the ship's staterooms feature balconies, a ratio made possible by the interior arrangement of the public areas and lounges. On typical cruise ships, public areas are on upper decks, but on the QM2 they are deeper within the hull, allowing more cabins to feature private balconies. The public areas themselves are rich and diverse, including the largest ballroom at sea as well as the most extensive library.

Dining aboard any Cunard ship is an experience to be relished, but aboard the QM2 it is truly magnificent. A range of different cuisine options from Mediterranean to casual fare are available, all complemented by the largest wine selection at sea. White glove service and authentic Waterford crystal and fine china make each meal a delight for every sense. 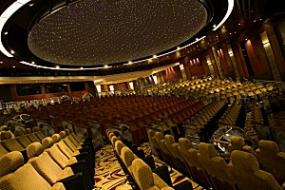 Every cruise ship today attempts to distinguish itself from the competition. As if the QM2's mere name were not enough, the ship also houses numerous exclusive features that set her apart. The Canyon Ranch Spa is a 20,000-square-foot facility with the latest in relaxation amenities, including a thalassotherapy pool with integrated waterfall, a thermal suite, and an aromatic steam room. The "Illuminations" full-scale planetarium is equipped to provide a variety of exquisite shows, and it also converts to a standard lounge to broaden the scope of available entertainment options. For female passengers who wish to dance the night away, gentlemen hosts are available to serve as experienced dance partners, and for guests who wish to partake of more sedate activities, the interactive televisions allow everyone to plan their daily schedule with complete flexibility and convenience.

A tremendous part of the cruise vacation experience is participating in new activities. In keeping with Cunard's luxury status and refined atmosphere, the Queen Mary II does not offer raucous diversions, but instead focuses on a variety of refined pastimes. While the casinos and virtual rides are available for a more active crowd, the majority of planned activities involve enrichment pursuits, with topics ranging from opera, oceanography, and interior design to meteorology, drama, and architecture. Guest lecturers vary on each sailing and prospective passengers should consult a travel agent for updated information.

As a true ocean liner, the QM2 offers multiple east- and west-bound transatlantic crossings each year. Her other itineraries include sailing the Norwegian fjords; Mediterranean voyages including ports in Spain, France, and Italy; western Caribbean sailings that call on Jamaica, Grand Cayman, and a variety of other ports; southern Caribbean voyages; and New England itineraries in the fall. The QM2 will begin her first world cruise in January 2007, with visits to dozens of ports and countries throughout both hemispheres.

Most itineraries originating in the United States depart from New York, Fort Lauderdale, or San Francisco. International departure ports are more varied depending on the specific itinerary. Voyages on the QM2 range from 6-12 nights, though there are short weekend cruises that allow passengers to experience the history and regal bearing of the ship without needing a royal treasury.

Cruising aboard the Queen Mary II is an unforgettable cruise vacation experience. The ship proudly carries on a fine history and tradition of excellent service and sophisticated living, yet her personality and flair are apparent in every wave she cleaves. The beloved QM2 truly is the reigning monarch of the high seas.

For more information about the QM2 and the rest of the Cunard Line, visit the official website. A virtual tour, extensive photo gallery, deck plans, bridge cam, sailing schedule and more is readily available.