When considering an exotic Africa river cruise, a trip down the river Nile is a luxurious way to see the many treasures of Egypt. Nile cruises can be as short as two or three days or last over a week. The ships that cruise the Nile are akin to small cruisers or upscale ferry boats, rather than over the top mega-ships. Because they are navigating a river rather than a large sea or ocean, these vessels are generally quite a bit smaller than a typical cruise ship. Nile cruises generally accommodate less than 200 passengers. 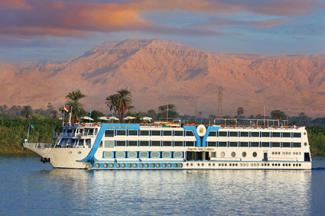 Based on reviews of Moon Goddess on TripAdvisor, the trip is a perfect upscale option for seeing the sights. The ship's maximum capacity is 100 passengers, so the service is individually suited and the excursions are also hosted by Sonesta guides one reviewer called "brilliant" and "knowledgeable". This trip is safe and educational for families, yet romantic enough for newlyweds. 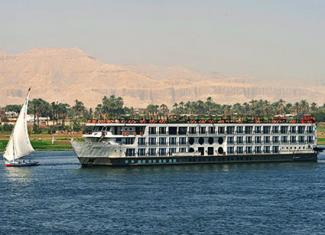 Viking River Cruises was voted Best River Cruise Line by Cruise Report in 2012. This internationally based company sails on rivers worldwide. They offer a 12-day Pathways of the Pharaohs cruise sailing round trip from Cairo, Egypt. This Nile River trip is offered as a traditional tour and cruise experience:

Past passengers have overwhelmingly positive reactions to the tours. One Cruise Critic reviewer gave a detailed account of the trip and boasted "the trip lived up to our highest expectations." A TripAdvisor reviewer from the United Kingdom sums up the trip with these words "Experiencing the wonderful sights of Egypt as we sailed down the Nile were spectacular."

Uniworld Cruise Lines was ranked one of the World's Best Cruise Lines in 2014 by readers choice picks in Conde Nast Traveler's Gold List. Its River Tosca liner has delivered comfort on the river Nile. However, due to unrest in the area, Uniworld suspended sailings in Egypt in 2013/2014. According to the River Cruise Advisor, this ship is scheduled to resume sailings in late 2015. 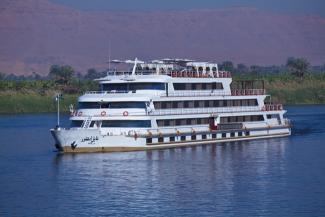 This boutique travel company originated in Africa, providing safari lodges and small ship cruises to upscale clientele. They have dedicated four vessels to Nile River sailings. All trips include hosted tours by Egyptologists and are available for three and four night scheduled sailings or seven night charters. The jewel of the fleet is the Sanctuary Nile Adventurer, which is a small, six deck ship with modern decor. On this ship:

Former guests rave about attentive staff and professional experience of the crew and management.

The MS Royal Rhapsody is a more budget-friendly option. Year round cruises departing from Luxor or Aswan for three, four or seven nights are available on the vessel. This small 26 cabin vessel is can be booked through Nile-Cruise-Egypt.com, which is based in Cairo:

Cruise Through History Along the Nile

Most Nile cruises begin in Cairo, near the mouth of the Nile River, and sail south to Luxor or vice versa. No matter which cruise option you choose, you'll have an opportunity to enjoy amazing sightseeing as you travel along this famous river. The Nile River is home to ancient cities containing sites considered wonders of the world.

From the Giza Plateau, the site of the magnificent Great Pyramid, one of the "Wonders of the Ancient World" to the colossal and amazingly preserved Temple of Karnak and Temple of Luxor, ancient history is around every bend of the river. Going beyond the usual cruise ports and experiencing the culture, food and people of Egypt can be an unforgettable vacation.