Mediterranean Cruises hold a special romance. From the craggy coastline of Portugal to the serene waters of the Aegean Sea, Mediterranean voyages explore historic sites, such as the former Greek city of Ephesus and the majestic ruins of Rome; romantic cities, such as Venice; and exciting playgrounds of the rich and famous, such as Monte Carlo and St. Tropez. A Mediterranean cruise is an ideal way to travel through Europe. There's no packing and unpacking and early morning bus rides. You simple cruise to the next destination while you sleep.

Eastern Mediterranean cruises can vary from seven to ten or more days. The more luxurious the cruise line, such as Seabourn or Silver Seas, the longer the cruise is, generally. The most common departure ports in the Eastern Mediterranean are Piraeus, outside of Athens, and Venice. Popular ports of call include the islands of Rhodes, Crete, Santorini, and Mykonos in Greece, Istanbul, Dubrovnik, and Valletta on the island of Malta. Some cruises also extend into the Black Sea and call at Odessa and Yalta, in the Ukraine.

Western Mediterranean cruises generally depart from Lisbon, in the west, Barcelona, or Venice. Popular ports of call include Monte Carlo, Livorno (the port nearest to Florence), Civitavecchia (the port nearest to Rome), Naples, St. Tropez, Marseille, Cadiz in the south of Spain, and the island of Mallorca. Some cruises also call at North African ports, such as Tripoli, La Goulette in Tunisia, and various Moroccan ports.

Advantages to Cruising the Mediterranean

The beauty of a Mediterranean cruise is that it allows a traveler to sample a number of countries and ports without the hassle of checking in and out of hotels, waiting at the airport, and unpacking and packing suitcases. The ship simply arrives at the next destination while the guests are sleeping or enjoying breakfast.

Another advantage to Mediterranean cruising is that one price includes airfare, the cruise accommodations, all meals and entertainment on board, taxes, and sometimes tips. With a cruise, there's no worrying about exchange rates or currency fluctuations -- and no unhappy surprises. 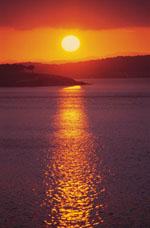 A Mediterranean cruise also carries the general advantages of cruising. That is, the wonderful and attentive service, the relaxed shipboard lifestyle, the myriad of services and activities, and the many dining options.

Mediterranean cruises are especially well suited to extending your cruise with a hotel/sightseeing package before or after the cruise. Port cities, such as Athens, Venice, and Barcelona just beg to be explored. In addition, sightseeing tours outside of the ports, such as to the Greek sites of Delphi, Corinth, or Mt. Olympus help impart a deeper sense of the region's history.

From Venice, travelers can explore the Tuscan countryside or Piedmont wine country. In Barcelona, one can marvel at the fabulous architecture of Antoni Gaudi as well as modern art masterpieces by Joan Miro and Pablo Picasso.

No matter which itinerary you choose, you're sure to succumb to the lingering, amber sunsets; the chic cosmopolitan port cities; and the casually elegant shipboard atmosphere. A Mediterranean cruise is truly a voyage of a lifetime.