Located on the southern coast of Oahu, Honolulu is the largest city in Hawaii and one of the most popular cruise destinations for Hawaiian voyages. This tropical city is the epitome of romance and Pacific island luxury: the perfect place to start a memorable cruise vacation.

While the Christmas holiday season and summer months are the busiest for Hawaiian cruises, interested passengers can book sailings from Honolulu throughout the year. Norwegian Cruise Line is the undisputed leader of Hawaiian sailings, with multiple interisland voyages departing each week, but other major cruise lines also offer these sought after itineraries, including:

Honolulu is both a frequent embarkation port as well as a popular port of call for many Hawaiian cruises. Because of this, passengers have a wide variety of travel options. Itineraries range from 7-12 nights or longer, frequently stopping at each of the major Hawaiian Islands with exotic ports of call including Kona, Hilo, Lahaina, Kahului, Kauai, Maui, and Nawiliwili. For cruises departing from the west coast of the United States, usually from San Diego, Los Angeles, or even as far north as Vancouver, Canada, five days or more at sea may be included in the itinerary. Both one-way and roundtrip voyages are available.

Because of cruise travel laws, ships that depart from a United States port are required to visit at least one international port during a voyage ( Norwegian ships have a different registry exempting them from this requirement). Therefore, many Hawaiian voyages also stop in a foreign port, typically in Mexico or as far distant as Tahiti.

For many travelers, a visit to Hawaii is a once-in-a-lifetime vacation. Honolulu, especially, has many noteworthy attractions for visitors who wish to enjoy more time in port, whether they've arranged a longer visit separate from their cruise or as a package through the cruise line. Popular sites include: 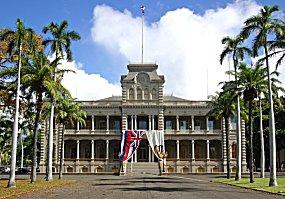 Getting to the Aloha Tower Cruise Terminal

Because of how crowded the city can become, particularly at the height of the cruise season, traffic can cause substantial obstacles to passengers attempting to reach their ships. While the Aloha Tower Marketplace and cruise ship docks are only six miles from the airport, it is important to leave sufficient time when arriving or departing. The pier itself offers very little public parking, and public transportation is recommended.

For more information about cruise facilities in Honolulu, contact the port directly at (808) 587-2076 or: