It's the largest and most innovative cruise ship in the world: Royal Caribbean's Freedom of the Seas has been making waves since her maiden voyage in May 2006. As cruise ships get bigger and better, passengers are continually awed by new features and expanded amenities. LoveToKnow Cruises was pleased to speak with Lyan Sierra-Caro of Royal Caribbean Corporate Communications about this extraordinary ship.

About Freedom of the Seas

The largest ship in the world by gross tonnage when she debuted, Freedom of the Seas has impressive statistics that will awe any cruise passenger. Royal Caribbean's Voyager class ships are already known for their immensity, and the Freedom class is approximately 15 percent larger. Other notable figures include:

In addition, the ship offers numerous deluxe amenities such as a men's barber shop (perfect for sprucing up prior to formal night, an adults-only Solarium with whirlpools cantilevered off the ship's side, and an athletic gear shop. The ship also features a bookstore, extensive spa, florist, video game room, and other features to make it truly one of the most impressive cruise ship afloat.In keeping with Royal Caribbean's adventurous nature, the new ship offers dozens of fun physical activities for passengers of all ages. The signature rock climbing wall has eleven different routes, and familiar features include the 9-hole miniature golf course, ice-skating rink, jogging path, and sports court. Children in particular will enjoy the ship's Adventure Ocean water park, complete with colorful spraying sculptures, waterfalls, and plenty of splashy fun, making Freedom of the Seas an ideal choice for family cruises. The ship even offers several family suite cabin choices for added convenience.

Health-conscious passengers will not only enjoy the physical challenges offered on Freedom, but they can find delicious healthy menus and treats to suit any dietary needs or preferences. The new protein shake bar is the perfect place for a healthy snack or quick pick-me-up after a vigorous workout in the ShipShape fitness center. 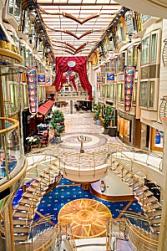 LoveToKnow asked Lyan Sierra-Caro several questions to discover the inside story about this new cruise ship. For even more information, visit the official website at www.freedomoftheseas.com.

What completely new features have been introduced on Freedom of the Seas?

Freedom of the Seas is the largest and most innovative ship in the world. She features the Flowrider surfing simulator, cantilevered whirlpools that overhang 112 feet above the ocean, the first boxing-ring at sea and one of the largest fitness centers at sea. Freedom also features many amenities that are on our Voyager class: the Royal Promenade, ice-skating rink, and our signature Rock-climbing wall, which is larger than any other in our fleet.

What itineraries are planned for Freedom?

Why was the decision made to introduce even larger cruise ships than the current Voyager class?

The size of Freedom evolved from all of the amenities that our guests were asking for and that we wanted to put on her.

What has been the most successful new feature on the ship? 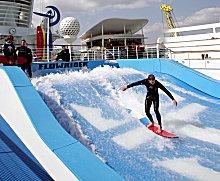 We have seen a tremendous response to the Flowrider. Not only do many of the guests want to try it, it is also a popular spectator sport. Note: There are bleachers around the Flowrider area for passengers to watch adventurous takers.

How many ships are currently planned for the Freedom class?

There will be three Freedom class ships.

How long did it take to plan and construct the ship?

It took 10 months to build Freedom of the Seas. Note: Freedom was built in Finland, at the Kvaerner Masa-Yards.

What percentage of cabins have routinely been booked during the ship's first sailings?

The ship has been sailing at almost full capacity since her first sailing on June 4.

LoveToKnow Cruises would like to thank Lyan Sierra-Caro for this generous interview as well as offering our visitors the inside photographs of Freedom of the Seas. Passengers interested in sailing on this ship or any of the Royal Caribbean's vessels should visit the official website, www.royalcaribbean.com or contact a travel agent.

0
Comments
© 2006-2021 LoveToKnow, Corp., except where otherwise noted. All Rights Reserved.
Expert Interview: Lyan Sierra-Caro on Freedom of the Seas