Cruises to exotic Aruba give passengers the opportunity to soak in the island's sunny climate, picturesque architecture, and white sand beaches. With its glittering casinos, abundant shopping, and European charm, Aruba is a popular port of call on many cruise ships' southern Caribbean itineraries. The following cruise companies all have ships with a variety of accommodations, including interior and balcony rooms. Most sail to Aruba from American ports, as well as one British port. While they all have a variety of packages to offer, the packages featured here give their respective cruise lines a little bit of an edge over the competition.

The Royal Caribbean is recommended for its romance packages. While never going overboard, they will decorate the room and leave roses on the pillows and champagne in a bucket of ice on the side. The Anniversary package runs about $225, and the cost of the honeymoon package is about $185. The Ultimate Romance package costs about $600, and they will give you breakfast in the morning and leave canapés and petit fours in your room every evening.

The Princess Caribbean has every right to pride itself on its provisions for teenagers and children. While the parents take advantage of its spa facilities, onboard counselors will provide activities for children between 3-17 at no extra cost. Don't worry, they don't mix the children together. For the 3-7 year olds, they hold such events as pajama parties. Kids 8-12 can participate in such events as scavenger hunts, and 13-17 years olds will enjoy events such as a DJ workshop.

Norwegian Cruise Liners pride themselves on what they call their freestyle cruises. Whether you are with your family, your partner or on your own, they have something for everyone. Kids will enjoy playing and chatting with their favorite Nickelodeon characters at the pajama jam breakfast, while their parents can take advantage of the spa on the upper decks. Passengers traveling on their own or with a partner can win money at the casinos, watch variety shows at the theater, and enjoy one of their fine dining restaurants, including a steak house and French gourmet cuisine.

Every cruise liner has a spa, but P&O is one of the few cruise liners confident enough in their spa facilities to provide a spa package as one of their main attractions. From $200 to $800 for up to 109 nights, you will have the luxury of priority service to the spa, complimentary consultation, and access to the Retreat, Oasis pool, and thermal suite.

The Aurora has a world class spa and three pools, but its biggest draw is the cafe Bordeaux bistro with a menu by the world famous French chef Marco Pierre White. At night, you can visit a choice of nightclubs, theaters, and casinos. Departing from Southampton, prices to Aruba start from $2,905 for 22 nights to $213,966 for 109 nights. 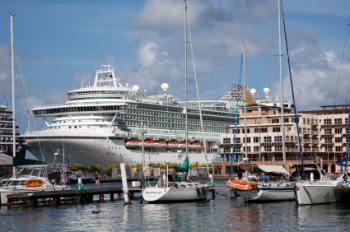 Cruises to Aruba arrive at the island's well-equipped and modern cruise terminal at Oranjestad, designed to accommodate even the largest vessels. A tourist information booth can provide local maps and attraction brochures, and passengers can access ATMs, if necessary. As in most cruise ports, there are several local shops available right at the dock, although more varied stores are only a brief walk away in the downtown shopping district.

For guests who wish to explore Aruba in a less organized fashion, there are many different cultural tidbits throughout the island that offer insights into Aruban culture, history, and lifestyle. Rental cars and mopeds are plentiful, and the roads are generally well-maintained, which makes it easy to arrange your own individualized tour.

Some of Aruba's most intriguing attractions include:

As with any port of call, visitors need to be aware of potential problems including occasionally aggressive merchants, as well as locals too willing to give private island tours, particularly to women. Due to the island's sun-drenched climate, cruise passengers should be sure to take appropriate precautions to avoid excessive sunburn or heat stroke, including drinking plenty of non-alcoholic beverages; taking a bottle of water along is a sensible choice. If renting a car or moped, drivers should note that many roads outside of the capital can become quite slippery with blowing sand.

Aruba is a southern Caribbean gem with its turquoise waters, sunny beaches, and impressive array of rugged rock formations. With abundant shopping and numerous cultural points of interest, cruise travelers will always find something to intrigue them on this quaint island, adding yet another unique experience to their vacation memories.