Of all the potential seagoing accidents, a cruise ship tilt is one of the most unpredictable, yet it occurs regularly on passenger ships. Knowing what causes the tilt and how to safeguard against it can help travelers be prepared for any potential problems.

What is Cruise Ship Tilt

A tilt is more accurately termed listing, when the ship leans heavily to port or starboard. Because most ship routes are planned with regular waves in mind, the rolling motion of a ship from bow to stern is less noticeable and not a major problem. Tilting to the side, however, is more dangerous and may cause passenger injuries or damage to the vessel.

Most cruise ships experience some degree of tilt during their regular voyages, but only severe lists are cause for concern. In July 2006, the Princess ship Crown Princess listed severely and more than 90 passengers suffered injuries, though such events are rare. Generally, a list of 15 degrees or more is considered severe, though a considerably lower angle can still cause injury, confusion, and other problems. The duration of the tilt is also a factor in its severity: more than 5 or 10 seconds is considered a severe list, even at small angles. 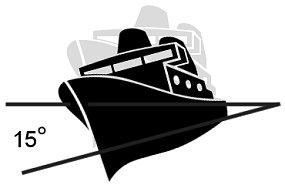 There are several factors that could cause a cruise ship to tilt. The most common causes include:

Because of advances in engineering and navigation technology, by far the most common cause of cruise ship tilt is human error on the part of one of the officers piloting the vessel. This is not a situation that can be foreseen by passengers, and tilt accidents are so rare that interested travelers should not fear the competency of the ship's crew before embarking on a cruise.

When a tilt accident does occur, dozens of passengers may sustain minor injuries, depending on the severity of the list and their reactions to it. The most common injuries include bruises, scrapes, and abrasions from sudden falls or broken bones caused by falling into hand rails or other protrusions. Deck chairs, in-cabin televisions and other equipment may slide or fall, and water in pools and spas may splash onto the deck, creating additional hazards. Passengers may also suffer from dislocated wrists and shoulders as they attempt to keep upright. The most severe potential injury is for a passenger or crew member to be tossed overboard, but strong guard rails help prevent such tragedies. After a sudden tilt, the ship's crew will begin standard emergency procedures, including contacting the Coast Guard or other maritime authorities and immediately verifying that all passengers are still on board.

While there may be no warning signs of an impending cruise ship tilt, passengers do have ways to protect themselves from accidental injury in case of a sudden list.

A sudden list can be a frightening experience, but by keeping a cool head and taking sensible precautions, passengers need not be injured during the unfortunate accident.