Carnival has had its share of problems in recent times, but as one of the world's largest cruise lines, it will likely bounce back. Before the troubles began, Carnival was famed for its fun atmosphere that embraced kids as well as adults. On a Carnival ship, you were just as likely to remember your time at sea as you were your time at exotic onshore locations.

Carnival Cruise Lines operates more than 20 ships in its signature line with the distinctive red, white and blue split funnel. The parent company, Carnival Corporation, also controls several other cruise lines, including Holland America Line and Cunard Line, for a total of more than 100 ships. The signature Carnival fleet, however, is instantly recognizable for the ships' distinctive funnels and the inherent "carnival" atmosphere that makes cruising a whirlwind experience.

Carnival's cruise ships are mega ships packed with activities, entertainment, and dining options. They are modern, floating resorts made to appeal to vacationers of all ages, including first-time cruise passengers, families, seniors, and honeymooners. The largest ships belong to the Dream Class, which can entertain around 4,600 passengers on each voyage; double occupancy is just over 3,600. Carnival's smallest ships are in the Fantasy class; total occupancy for those ships is just over 2,600 and double occupancy is around 2,000. 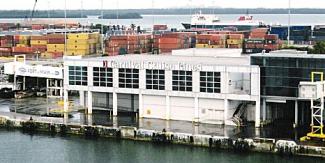 Due to the large number of ships in the Carnival fleet, eager cruisers can find a Carnival ship in numerous departure ports around the United States. Larger ships are typically positioned for longer cruises of five to seven nights or more, while smaller vessels cater to more limited markets from smaller ports such as Jacksonville, Florida. Miami is home to Carnival Cruise Lines' headquarters, so the port of Miami naturally offers the widest variety of cruises.

Carnival no longer features themes on their ships as they once did, and their newer ships, like the Carnival Breeze, have been decorated in a more causal style than their ships have previously had.. As a relaxing retreat, each cabin is decorated in more muted tones and neutral colors.

With large ships stationed at numerous ports, Carnival offers a wide range of vacation itineraries, including Mexican Riviera cruises, voyages along Alaska's Inside Passage, and short Bahamas trips. The overwhelming majority of Carnival's itineraries, however, explore the Caribbean, with western, eastern, southern, and exotic routes available. Other limited itineraries include Hawaii, Canada, Europe, and the South America. Whether you are interested in a three-day weekend voyage, a lengthy twelve-day getaway, or anything in between, Carnival most likely has an itinerary to match your vacation needs. 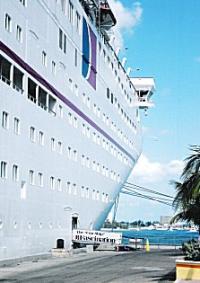 The following are some of Carnival's recent deals.

There's always something to do on one of these bustling cruise ships. Visitors can take part in any number of exciting activities, which can vary a bit from ship to ship, or they can simply relax on deck and take in the atmosphere. Here's an overview of what these cruises offer.

Carnival ships offer a variety of restaurants with gourmet cuisine from around the world, including Mongolian, Asian, Mexican, Italian and American, as well as a menu just for the kids. Some of the more exclusive restaurants require reservations, and you must pay to dine. Carnival states that their kitchens never close, so snacks are available 24 hours a day, including complimentary ice cream and frozen yogurt. Specialty coffees, shakes, and baked goods may also be purchased.

Room service is also free and available 24 hours, but the menu is limited after regular hours.

Some ships feature Carnival's "Playlist Productions." These shows combine live performances with high-tech lighting and a variety of special effects. These shows will eventually be added to the entire fleet.

Guests can also visit "Punchliner Comedy Club presented by George Lopez." on many of Carnival's ships. Lopez himself is involved in making sure the most talented comics are hired to perform in the clubs.

Music lovers can dance away to music provided by Carnival's DJ's, who have gone through training at "DJ IRIE Spin'iversity." 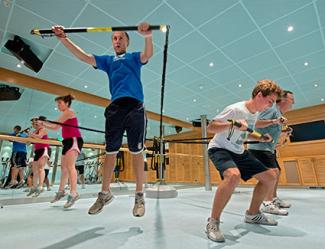 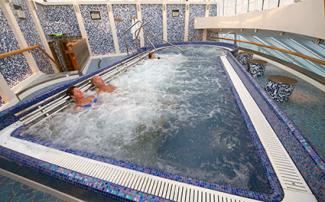 Carnival ships have gyms that feature a variety of exercise machines and weights, as well as spin classes, yoga and more. Some classes are free, while others require a fee. Ships in the Fantasy class also have roomy spa and fitness areas.

Some vessels offer sports like volleyball and basketball. On the newer ships, guests can take advantage of "SportSquare," an open-air recreation complex that features a suspended ropes course, as well as mini-golf, a jogging track, and various tabletop sports. All ships feature a water park-style attraction with a 312-foot-long Twister water slide and other fun features.

Carnival's spas offer a full list of services designed to pamper their guests. Schedule a manicure and hair styling before one of the ship's formal nights, or schedule a massage and maybe some of their other treatments like facials and body wraps. 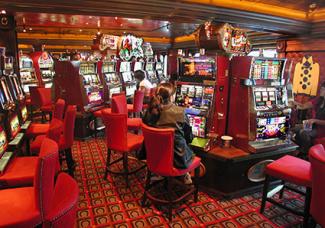 Carnival ships feature casinos that are packed with all the standard gaming options you'd expect to find, and tournaments are sometimes organized for guests as well. Whether you prefer playing blackjack, slot machines, or bingo, there's bound to be a game that will entertain anyone.

Carnival Cruises offers several options to keep kids entertained while on board. There are three divisions, and each offers age-appropriate activities.

Group babysitting is also available at designated times, and there's an option for kids to have their dinner under staff supervision so parents can have a chance to relax and dine on their own if they like.

In recent times, Carnival has experienced serious malfunctions with several of its ships that have led CNN to speculate whether the company will be able to keep its customers. In March 2013, the network reported that the company had to fly 4,000 passengers back to port after a ship had lost its power. A month before that, engine failure of another ship had left passengers stranded in the ocean for five days. One person even stated that despite the fact that bathrooms had stopped working and passengers could not leave the ship, the captain provided limited information about what was happening.

In light of these events, it's worth asking if a Carnival cruise worth the risk? The answer depends on your priorities. You probably don't want to risk a disastrous holiday for your family or go with a company whose recent customer relations have certainly been less than ideal. Nevertheless, this could be your chance to get a luxury cruise for a relatively cheap price. Surely with so much focus on them, Carnival will try to avoid making the same mistakes again.

Cruising Into the Future

For first-time cruise passengers or anyone interested in a fun, active vacation, a Carnival Cruise is still an option, provided there aren't any of the same problems that have plagued recent cruises. With round-the-clock activities, widely varied ports of call, and multiple itinerary options, Carnival still has a lot to offer.