Bosphorus dinner cruises provide a fantastic glimpse into the nighttime utopia which has become one of the most spectacular cruising wonders of the world. Enjoy a glass of champagne or fine wine as you watch the golden sun sink slowly beneath the picturesque surface of one of the most majestic waterways on earth. Indulge yourself aboard your very own private yacht as you journey into an ethereal oasis unlike any other cruising destination on the planet. The stars come alive as the evening palpitates with elegance and ubiquitous magnificence. Let's take a closer look at why Bosphorus dinner cruises have become such a fabulous and enchanting cruising experience.

Bosphorus is one of the most strategic aquatic gateways in the world. Bosphorus is the straight between the Sea of Marmara and the Black Sea. It is also known as the Istanbul Straight. This extraordinary straight separates the European portion of Turkey (known as Rumelia) from its Asian portion (known as Anatolia). The straight is so awe-inspiring because it is the narrowest straight on the face of the planet that is still used for international navigation.

The terrain is exquisite, especially for an evening cruise, where the yacht can journey through an inundated valley of exceptional beauty. Bosphorus was once a fertile river valley, but was drowned beneath the sea at the conclusion of the Tertiary period. The straight is incredibly busy with many oil tankers and ships. Local fishing boats and passenger boats also frequent the waterway.

Origin of the Name Bosphorus

Bosphorus derives from a Tracian word whose origin is unknown. The Greek language interprets the meaning of Bosphorus as Ford of the Cow. Certainly, this sounds strange, but it comes from an old legend known as the legend of lo. Lo was one of the multiple lovers of Zeus, who was the king of the Gods according to Greek mythology. According to the legend, Lo swam across the straight in the form of a cow, while continuously being disrupted by troublesome flies that were sent by Hera.

Cruise aboard a private yacht on one of the most spectacular nocturnal waterways on the surface of the planet. Engulf yourself with sophisticated elegance as you enjoy the views which surround you in every direction. The eclectic scenery is exceptional, and the service is phenomenal. Watch the sun set, and the evening come alive. Cruise by fabulous Ottoman palaces and magnificent villas, both of which are ornate and amazing to behold. The fascinating culture and rich history of this exquisite region takes hold and transports you into paradise aboard a luxury cruise which caters to your every waking desire. 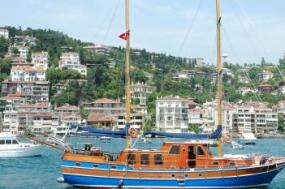 There is so much to see aboard a dinner cruise in this impressive waterway. Watch the enormous round domes, luxury homes, and impressive minarets fill the skyline. Enjoy the flickering city lights consuming the sky with their vast pervasive luminance, exuding beauty as the soothing music aboard the yacht becomes a truly melodic symphony of an elegant cruising experience unlike anything you could ever imagine. Watch the city lights bounce and dance across the ripples in the water, from Asia all the way to Europe, displaying profusions of spectacular colors; gold, red, and orange.

The evening is consumed by magic and shrouded in mystical enchantment. The cruise is perfect for romantic dinners and also for family celebrations. When the cruise is finished, you can choose to be dropped of at your hotel, or in front of one of the famous and fashionable nightlife spots along the Bosphorus shore.

Specifics About the Cruise

How to Book the Bosphorus Cruise

Many hotels in the area can take care of all your accomadations. There are also companies that charter the luxury yachts which make this dinner cruise so special. As a general rule, if you have fewer than five people you can find a great deal. More than ten people might cost extra. Gurger Tours is one of the popular Istanbul tour companies which offers these exciting dinner cruises.