Bermuda cruises are More exotic than the Bahamas and take passengers to an elite destination, known for its duty-free shopping, colorful architecture, and friendly people. Combining the essence of a tropical paradise with charming British hospitality, Bermuda offers cruisers a wide variety of relaxing activities and cultural insights for every visitor.

When to Take a Bermuda Cruise

Bermuda cruises are only available during the summer months, from late April through October. Located in the western Atlantic, roughly parallel to the Carolinas, Bermuda is still susceptible to hurricane influences between June 1 and November 30, but the country is less often affected by the treacherous storms than more southerly destinations. The nation's temperate climate and relative isolation make it a pleasant getaway for laid-back passengers, and Bermuda's government strictly regulates the influx of cruise ships to control the number of tourists and avoid overcrowding. An additional ship is permitted to dock on weekends, making them slightly more crowded than weekdays.

Bermuda cruises are typically five- or seven-night voyages, given the island's distance from the United States. Because Bermuda is frequently the only destination on these voyages, ships may spend several days docked at the same port of call, allowing guests to thoroughly explore and enjoy the region's quaint character. Longer itineraries may also visit the eastern Caribbean or Bahamas, and many transatlantic voyages will stop in Bermuda as well.

Departure ports naturally change as cruise lines adjust ships' itineraries and home ports, and to insure that Bermuda cruises are offered from a preferred departure port, prospective passengers should contact a travel agent for the most current itinerary information.

Ports of Call for Bermuda Cruises 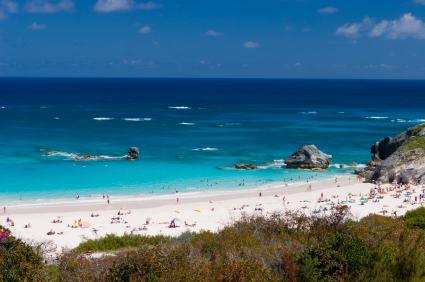 There are three principle ports of call in Bermuda. Because of the island's distance from other destinations, most Bermuda cruises only call on this one nation, though they may visit more than one of the available ports.

Because of Bermuda's small size (only twenty square miles), even if a cruise ship calls only at one port it is possible for passengers to arrange taxi rides to visit other areas. When doing so, however, it is important to note that taxi fares are metered and with winding roads, the total fare can be significant.

With luxurious pink sand beaches, calm tropical weather, dozens of historical sites, and incredible shopping opportunities, Bermuda offers a unique blend of luxury cruising with resort amenities on shore, perfect for an isolated getaway without sacrificing the excitement and enjoyment of a cruise vacation.