As the largest port in Europe, the Port of Piraeus near Athens is the cruise ship hub of the Mediterranean. Before simply viewing this gorgeous port as nothing more than a departure or arrival point, however, prospective passengers should learn about its rich history and culture, both of which make it an exceptional cruise destination.

Serving more than 20 million passengers annually (including ferry traffic to other Greek Islands), the Port of Piraeus is both the largest and the busiest harbor in the Mediterranean and is regularly visited by most major cruise lines, including:

Equipped with twelve modern berths, the docking facilities can handle even the largest modern ships, and both the Queen Mary II and Royal Caribbean's Freedom of the Seas, two of the largest ships in the world, have visited Piraeus. Because passengers have their choice of both mainstream and luxury lines, there are many options for cruise travelers interested in visiting Athens.

With so many ships calling on Piraeus, the itinerary options vary widely. The vast majority of cruises originating from this departure port are Mediterranean cruises, involving ports of call in Spain, Turkey, Italy, France, and Greece. Both one-way and round-trip options are available, and seven-night cruises are the most popular choice, though cruise durations can range from 4-18 nights or more.

For passengers who choose not to embark or disembark in the Port of Piraeus, there are several cruise lines who also incorporate this Grecian city as a port of call on other Mediterranean, world, and transatlantic voyages, offering even more flexibility for travelers' cruise vacation plans.

Athens is a city of mystical wonder and charm, and the Port of Piraeus is the marine gateway just seven miles from the famed city. While docked, there are many historical and cultural treasures to visit, including: 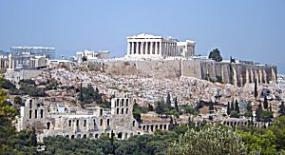 The Acropolis and the Parthenon.

Getting to the Port of Piraeus

As one of the busiest ports in Europe, the transportation network connecting the Port of Piraeus to cruise ships is well-developed and easy to use. The cruise terminal is just thirty minutes from the international airport, and bus lines, metro rails, and commuter trains all run to within a few hundred yards of the dock. Open-air parking is available for personal vehicles, or passengers can choose to arrive via ferry from other islands in the Aegean Sea including Crete or the Dodecanese Islands. The passenger terminal is in the center of the port area and is easily marked for passengers' convenience.

To learn more about Athens and the Port of Piraeus, visit either www.piraeus.com or the official website of the port itself, www.olp.gr. Prospective passengers can also write to the port facility at: