Many people envision a tropical destination as remote, untouched, and exquisitely beautiful, and an Amazon cruise can be all those things. A unique choice for a cruise vacation, the Amazon River is rapidly becoming the highlight of many South American cruises.

When to Take an Amazon Cruise

Voyages that include the Amazon in their itineraries are typically scheduled during the winter season, from October through March. Because of the region's extreme latitude (the equator runs through the Amazon River delta), this makes it a pleasantly warm destination from northern ports, though prospective passengers should be aware the holiday cruises are the most popular and sell out quickly.

An Amazon cruise can be as short as a mere ten days or as long as a month, depending on the other ports of call involved in the overall itinerary. Major cruise lines often include Amazon ports with other South American voyages, or as part of world cruises, though passengers are permitted to choose the select portion of the world itinerary that peaks their interest. There is a mix of one-way and round-trip voyages available, though one-way journeys are more popular and allow passengers to experience a greater variety of destinations.

Because an Amazon cruise appeals to seasoned cruisers, upscale cruise lines frequently offer the jungle destination as part of their regular rotation. On the other hand, because of its distance from popular Caribbean ports, the Amazon River is not an option for most mainstream cruise lines that cater to first-time cruisers or individuals less interested in the overall destination. Princess Cruises offers a selection of Amazon destinations on a variety of their voyages, while Radisson Seven Seas Cruises, Oceania Cruises, Seabourn Cruises, and Silversea Cruises are luxury lines that offer a more limited though no less enjoyable range of options. Holland America frequently includes the Amazon during its world cruises.

Because the Amazon is such a southerly destination, embarkation ports are typically outside the United States, particularly for shorter itineraries. San Juan, Puerto Rico is a popular starting point, as is Rio de Janeiro, Brazil along with Manaus, Brazil (also a favorite port of call for round-trip voyages). United States embarkation ports include:

Because Amazon itineraries can be quite limited, interested passengers should consult a travel agent for current options and itineraries.

Ports of Call for Amazon Cruises

Amazon voyages often include southern Caribbean ports such as the British Virgin Islands, Barbados, French Guiana, and the Dominican Republic. Along the river itself, however, the most popular ports of call are: 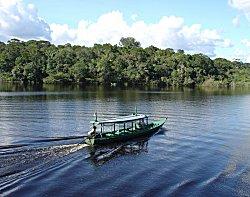 While deep in the Amazon jungle, passengers can experience a number of shore excursions such as canopy tours, river cruises, eco tours, jungle treks, and visits to rubber plantations. For less adventurous activities, city highlight tours and shopping excursions are also offered.

For an exciting and unique destination, many cruise passengers consider taking an Amazon cruise. With a rich culture and exquisite landscape, the region is rapidly becoming one of the most popular South American destinations.