Typically held once a year in early to mid-February, the Monsters of Rock Cruise (MORC) is part cruise and part rock concert at sea. This on-the-seas adventure visits beautiful Caribbean destinations and features some of your favorite 1980s rock and metal bands performing throughout the trip.

Cruising With Monsters of Rock

The annual five-night charter cruise departs round-trip from Florida and visits various Caribbean ports. In 2018, ports included Falmouth, Jamaica, and exotic Labadee. Labadee is Royal Caribbean's private beach in Haiti, and they are the only cruise line that sails there, making it even more private.

In most cases, the bands play two concerts during the cruise and are on board for the entire duration. The only exception is when they have a prior engagement and may need to depart a day early or arrive a day late. Schedules and events for the cruise are not announced until embarkation because they are still coordinating schedule changes and don't want to release multiple versions. 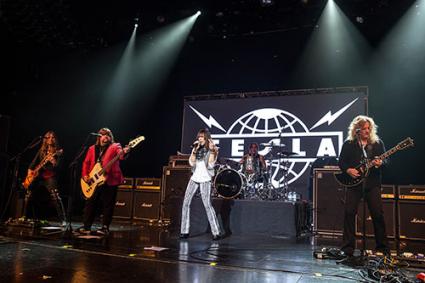 Tesla on Monsters of Rock Cruise

The five-day cruise attracts some of the best names in hard rock and heavy metal. Some headliners on the 2018 cruise included:

Prior years have included a number of other notable headliners, including Saigon Kick, D-A-D, Kix, Night Ranger, Slaughter, Helloween, Extreme, and Faster Pussycat.

In addition to the non-stop entertainment on board, there are usually one to two pre-cruise parties announced ahead of time. Cruisers will have the opportunity to further interact with the bands through Meet and Greets, Q&A with the artists, charity benefits, and guitar clinics and classes. 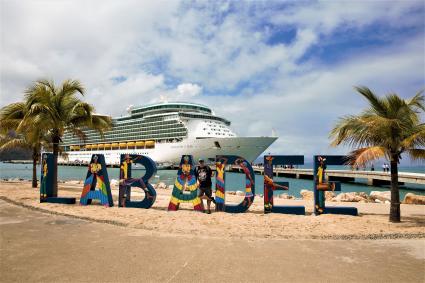 Navigator of the Seas at Labadee

As of 2018, the Monsters of Rock Cruise takes place on Royal Caribbean's Navigator of the Seas, which calls Miami its home port. This Voyager Class ship features the massive Royal Promenade, a cool four-story boardwalk that connects cruisers to some heavy metal stages, including two indoor main concert venues. The Navigator of the Seas is known for its endless choice of things to do, including the FlowRider Surf Simulator, so there is plenty to enjoy in between events and shows.

All cruise fares, which start around $1,200 per person, include the cruise itself and:

The base cruise fare doesn't include government fees, taxes, and prepaid gratuities, which run around $275 and will be added to the reservation. You will also need to pay for shore excursions, meals off the ship, specialty restaurants, onboard services like spa treatments, and internet access.

For guests looking for a discount, they do offer a 5 percent cabin discount if you prepay the entire cruise in full at once, with full payment received within 72 business hours of booking. Unfortunately, single cruisers typically pay the double occupancy fare, and are still responsible for all the fees and prepaid gratuities. Monsters of Rock will not arrange any roommate matching, but there is a Facebook group that was created for the sole purpose of finding a cabin mate.

Bookings for the Monsters of Rock cruise are offered for sale starting on a particular date and time to be announced each year. The only way to book this specialty cruise is through the website or by calling 855-505-6672.

If you don't already have a passport, you need to look into the rules for the itinerary to verify you have the proper valid identification. Monsters of Rock Cruise organizers strongly suggest everyone get a passport or a passport card. All guests will be required to show valid proof of citizenship. Be sure you plan far enough in advance if you're applying for a passport or passport card. There is a detailed outline on the cruise website describing your different passport requirements and options. Also, it's important to remember that with the new restrictions on some driver's licenses because of the REAL ID Act, you may not even be allowed on the plane to Florida without proper ID.

Because this is a charter cruise, the cancellation policy is far more strict than you'd find on a regular cruise. There are no refunds given if you don't show up for the cruise on time or otherwise use your ticket. It's in your best interest to purchase travel insurance for this particular itinerary.

MORC designates all ships as non-smoking, but they have several special areas where you can smoke cigarettes and cigars, as well as e-cigarettes. You cannot smoke inside the cabin or on your balcony, nor anywhere outdoors.

The overall sentiment from past cruisers and music sites is that the Monsters of Rock Cruise is not to be missed if you're a hard rock or heavy metal fan. Repeat cruisers like the community aspect that develops after you've attended multiple cruises.

Professional photographer Jason Miller from Rock'n Roll Cocktail summed up his 15 most epic moments from the 2017 cruise in photos. Commenters noted the disappointment that year was with Vince Neil's performance. Other general complaints tend to revolve around issues with prior MSC ship's services, like lackluster food, which isn't why people attend these specialty cruises in the first place. As far as logistics, bands, and activities go, Monsters of Rock cruisers are generally thrilled with the annual event. Many cruisers are repeat attendees, which speaks to the quality of the event.

The music site NYS Music attended the 2016 Monsters of Rock East Cruise and noted a lot of positives, but pointed out the biggest disappointment that year stemmed from the behavior of one of the musicians, especially toward the photographers.

Because this is a specialty charter cruise that generates quite a bit of buzz, you should plan to book as soon as the cabins go on sale. If you're in need of a roommate, join the Facebook group as far in advance as possible to see if you can find a match before tickets go on sale for the next sailing.

Be sure to plan accordingly as much of the event will be outdoors and you will be traveling through the Caribbean. The sun will take a toll on your skin, so be prepared to apply sunscreen frequently. And be prepared to don your best heavy metal and hard rock attire. Once the lineup is announced, dust off your old t-shirts or hit up the vintage and thrift stores to find some old band shirts to wear during the events.