At sunset, Mexican free-tailed bats who live under the Congress Avenue Bridge in Austin emerge for their nightly forage. With an estimated 750,000 to 1.5 million bats living under the bridge, the colony is recognized as the "largest urban bat colony in the world." A lot of people stand by the bridge to watch the nightly event, but another fun option is to take a riverboat cruise.

The bat watching cruises are seasonal and can be booked March through October. It is recommended that you make reservations ahead of time as they do tend to fill up on some days. Departure time is approximately 30 minutes before sunset. Since sunset time varies throughout the year, you need to call to verify departure times for your intended day of the tour.

Ticket prices for the one-hour bat watching tours are as follows:

You can purchase tickets directly on Lone Star Riverboat's website. All cruise tickets are non-refundable and boarding begins approximately 45 minutes prior to the tour time. If you have a reservation, they only hold them until 15 minutes before the tour starts, and then they begin selling open seats. Since tours can sell out during peak season, you need to allot enough time to get there before your seats are sold to someone else.

Tours depart on the south shore of Town Lake, between the Congress Avenue and South First Street Bridges.

The Lone Star is the newest boat in the fleet. The double-decked paddle-wheel riverboat is 75 feet long and 16 feet wide. The lower cabin has air conditioning and the upper deck is the ideal spot for bat watching. It holds up to 130 people, perfect for the busy season. 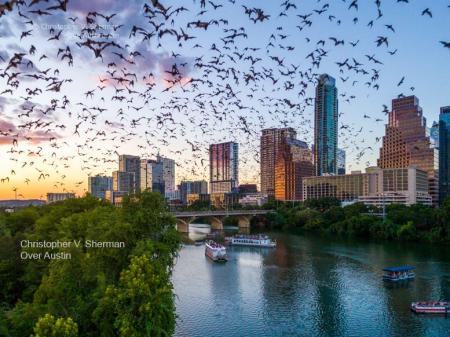 Many reviewers note the boats are a terrific way to enjoy seeing the bats. There are no bad seats on the boat, especially the smaller pontoon boats, and you get unobstructed views of the skyline, sunset, and some interesting narrative from the captain. People seem to enjoy the commentary and information they learn about the bats, which is something you won't get just watching them from the shoreline.

If you want to get your desired seat, it's highly recommended you get there earlier than when boarding starts 45 minutes before departure. A lot of people queue up early, so it can be packed already an hour before. Because the boats depart from a popular bat watching spot along the river, parking can be tough the later you arrive too. The other option for parking is nearby at the Hyatt, but there is a charge, whereas parking for the boat is free.

During peak times, they use the two-level paddlewheel boat, which again, fills up instantly, so it's worth getting there early in order to secure the best spot.

The best time to visit is typically in August, when it's the hottest and driest out, because the bats have to emerge to go look for food. When it's rainy, there are fewer insects out, and the bats don't have to leave as early to forage for food, so you may not see as many.

Since the tour takes place at dusk, be wary of tons of mosquitos. Wear long sleeves and ensure you have plenty of bug repellent. One TripAdvisor reviewer noted that you will get peed on by bats. They note it's not enough to drench you, but it felt like a light rain. Bring an old hat and long sleeve shirt just for that if the idea of bat urine freaks you out in any way.

There are no services on the boat, so it's basically BYOB. If you want to drink and enjoy some snacks during the one-hour trip, pick them up before you arrive at Lone Star Riverboat Cruises. Be sure to use the bathroom ahead of time too, either at your own hotel or you can go up to the Hyatt and use theirs prior to the cruise.

Why Visit the Bats in Austin

Bat watching has become one of the most popular and unique activities in Austin; it's something everyone should experience at least once during their time in the city. Austin City Guide notes that while you can watch the bats standing above the bridge or on the south side of Lady Bird Lake, there is nothing quite like seeing them from the water on a boat.