The cruise ship industry is always evolving and the latest trends skew towards building bigger and better ships, packed full of adrenaline-pumping adventure activities, world-class entertainment, and endless dining options. As the size of new ships continues to increase, the title of the largest cruise ship in the world changes nearly every year. This list of the largest cruise ships in the world is accurate as of August 2017.

Harmony of the Seas

Harmony of the Seas is currently the largest cruise ship in the world and is part of the Royal Caribbean line. It's part of the Oasis class of ships, renowned for being the world's largest; nearly 30% larger than the next largest ships.

There are three water slides, called The Perfect Storm, two rock-climbing walls, two surf simulators, ice skating rink, zip line, and more. The Ultimate Abyss, which sends thrill seekers down a 10-story dry slide through twists and turns, complete with loud noises and flashing lights, is not to be missed. While there is a seemingly endless selection of bars and lounges on board, the Bionic Bar is quite unique, with a staff of only two robot bartenders that are capable of making 1,000 drinks a day.

Allure of the Seas 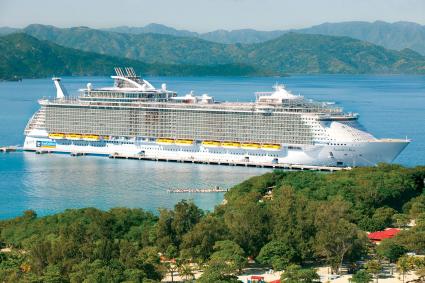 This was the world's largest passenger ship when it debuted with Royal Caribbean in 2009. The second ship in the Oasis-class line, the ship is essentially the same as its sister ships, like Harmony of the Seas.

A fun fact about the Allure of the Seas is that her honorary Godmother is not human. It's standard practice for a ship's Godmother to attend the ship's naming ceremony, officially welcoming the ship into the fleet. Princess Fiona, from the Shrek film series, was the official godmother for Allure of the Seas, and presided over the ceremony in 3-D from the screen in the Amber Theater.

Oasis of the Seas 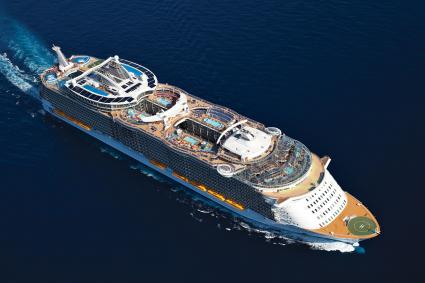 Oasis of the Seas was the first Oasis-class ship for Royal Caribbean and has similar features to her sister ships.

The Oasis of the Seas naming ceremony was legendary as seven godmothers were appointed for her to celebrate the seven neighborhood districts that are a signature feature of the Oasis class ships. The godmothers are:

The Allure of the Seas ended up beating out Oasis of the Seas by accident only. Oasis is only 50 mm shorter than Allure of the Seas, which the shipyard maintains was not intentional and the miniscule difference might be due to the temperature of steel at the time the measurements were taken. 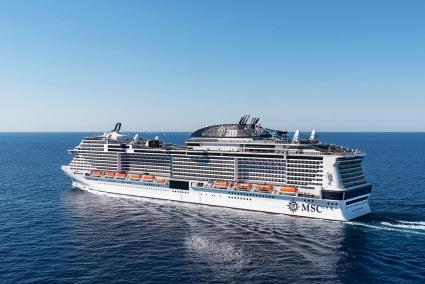 The MSC Meraviglia is the fourth largest in the world, and the first non-Royal Caribbean ship on the list. It first set sail in 2017 and was the largest ship unveiled this year. Its maiden voyage was from Le Havre, France, to Genoa, Italy, with Sophia Lauren on hand to christen the vessel.

There are 19 decks and 22 room categories, including connecting family cabins and interior studios that are perfect for solo travelers as there is only a single bed. Entertainment on the MSC Meraviglia is top of the line, including the first Cirque du Soleil show at sea. Guests can book a show with drinks or a show and a three course dinner (additional fee for both).

Look for the Meraviglia to gain a sister when the Bellissima debuts in 2019.

Quantum of the Seas 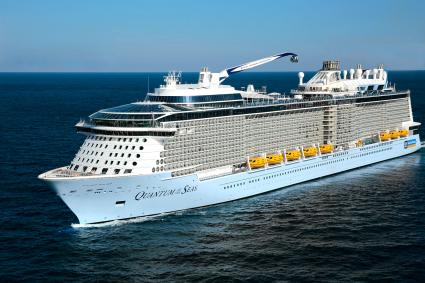 Royal Caribbean is back on the list with the fifth biggest cruise ship in the world, the Quantum of the Seas. This ship is geared towards Chinese guests with a Mandarin speaking crew and local Asian cuisine served onboard.

Interior staterooms have state-of-the-art, floor-to-ceiling, 80-inch high-definition TV screens showing live views, which Royal Caribbean dubs "virtual balconies." One of the coolest features of the Quantum class ships is the "North Star" observation tower that lifts up to 14 guests at a time up along a crane arm to reach about 300 feet above sea level. 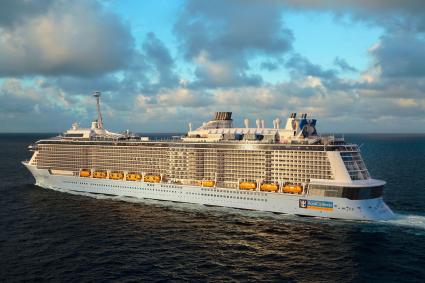 Anthem of the Seas was the second Quantum-class ship in Royal Caribbean's line and it debuted in April 2015. It has all the same features as its sister ship, Quantum of the Seas, including the North Star observation tower.

The christening ceremony for Anthem of the Seas was impressive as it made its debut in the UK that summer. British travel agent, Emma Wilby, was chosen out of thousands of UK agents, thanks to her ability to sing an anthem. She had the honor to sing Katy Perry's "Firework," and then pushed a button that sent a large bottle of Perrier-Jouët champagne down a zip line from the North Star gondola ride into a wall with the ship's name.

Ovation of the Seas 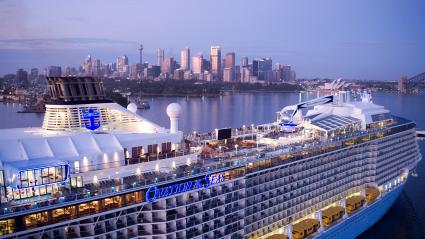 Ovation of the Seas is also a Quantum-class ship operated by Royal Caribbean International. The Quantum-class ships surpassed the earlier Freedom class by over 14,000 gross tons, becoming the second largest class of ships behind the Oasis.

While Ovation of the Seas is structurally similar to its sister ships, it does have some unique touches. Look for a 32 foot tall panda and cub, as they represent good luck and are a national treasure of China. The pandas join Felicia the pink polar bear on Quantum and Gigi the giraffe on Anthem.

Look for dual language signage throughout the ship, and a majority of the staff can speak Mandarin since the ship is based in China part of the year. When it heads to Sydney for the Australian summer, some of the food, drinks, and activities are changed around for local tastes. 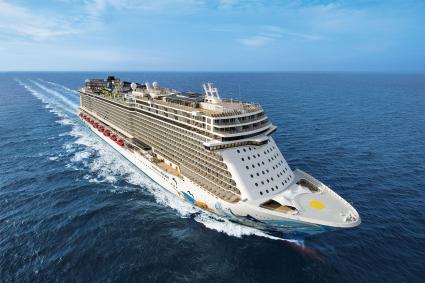 Norwegian Cruise Line's Escape is the first Norwegian ship to make the world's biggest cruise ship list. It was launched in 2015 and broke longstanding tradition by having the ship christened by a godfather rather than a godmother. Rapper Armando Christian Perez (better known by his stage name Pitbull) had the honor of presiding over the launch of the Norwegian Escape.

The stunning artwork on the hull of the ship was painted by noted artist and conservationist Guy Harvey, who dubbed it the largest billboard in the world for conservation of marine life.

Norwegian offers a large version of the line's signature "ship-within-a-ship" luxury suite area, called The Haven. Here you'll find a private pool, sun deck, restaurant, and bar. There is no shortage of fun on the Escape either, with a huge deck-top fun zone complete with four water slides, restaurant-lined boardwalk, and a snow room in the spa.

Other notable features include a miniature golf course, the largest ropes course at sea, the first Margaritaville at sea, bocce ball court, and even a full-size basketball court.

Royal Caribbean International is preparing to outdo itself with a number of gigantic ships that are under construction. Two of these will become a tie for the number one spot. These two ships have a gross tonnage of 230,000 GT, beating out the current leaders by around 4,000 GT.

Symphony of the Seas will visit destinations in the Mediterranean like Barcelona, Provence, Florence, Rome, and Naples during her inaugural summer season and then head to Miami to start seven night Eastern and Western Caribbean itineraries.

Symphony of the Seas is 1,188 feet long with 18 decks, and according to Royal Caribbean, is about as tall as the Leaning Tower of Pisa. There are 2,775 staterooms, which is 28 more than Harmony of the Seas. It will have seven district neighborhoods, including a tree-lined Central Park and the luxury Royal Promenade.

Some of the cool features on this soon-to-be world's largest ship include a 10-story slide called Ultimate Abyss, a trio of water slides, and Splashaway Bay kids water park. A second pool will be added to the Solarium on deck 15 as well.

In general, Oasis class ships feature a split structure with the 5-deck Central Park and Boardwalk areas running down the middle of the ship.

The list of the world's biggest cruise ships is ever changing, and by 2021, there will be three ships that can hold nearly 7,000 passengers each. The trend seems to be bigger is better and, if Royal Caribbean continues building these massive Oasis class ships, they may eventually dominate all ten of the top spots!