Travelers looking for cruises departing from Jacksonville, Florida will find the port is used by Carnival Cruise Lines. Nearby in Amelia Island, you'll find America Cruise Lines, which runs river type cruises out of Jacksonville.

The ship that sails out of Jacksonville's JAXPORT is the Elation, owned by Carnival Cruise Lines. The Elation debuted in 1998, and is part of Carnival's Fantasy-class, which was concluded shortly after the Elation's launch. While Carnival is concentrating on their bigger and newer vessels, Cruise Critic noted that the Elation has not been neglected.

In fact, it has undergone extensive upgrades under Carnival's $350 million "Evolutions of Fun" program. In addition to upgrades with decks and buffet additions, Elation was also the first ship to be equipped with Azipod Propulsion. This state-of-the-art system helps with the ship's maneuverability with the bonus of saving hull space.

The Elation can hold up to 2,130 passengers and is 855 feet in length. It operates itineraries that range from 2-5 days and 6-9 days. Part of the ship's last upgrade included the addition of Guy's Burger Joint (by Guy Fieri), BlueIguana Cantina, the RedFrog Rum Bar, Build-A-Bear Workshop, and WaterWorks, Carnival's onboard water park.

Not surprisingly, the itineraries out of Jacksonville are geared towards popular Caribbean spots, a specialty area for Carnival. There are also longer cruises to Bermuda.

One option for the Elation is the four-night cruise to the Bahamas with stops in Freeport and Nassau. You'll depart Jacksonville in the late afternoon and be in Freeport by noon the next day. You depart Freeport in the evening and arrive in Nassau by 8 a.m. After departing Nassau later that day, you'll spend the next day at sea before arriving back in Jacksonville on the fifth day.

Cruise enthusiasts who want to head somewhere other than just the Bahamas can pick the eight-night Bermuda cruise that offers a bit of the Bahamas and a few days in Bermuda. After spending your first day at sea, you'll visit Half Moon Cay, or Little San Salvador Island, in the Bahamas. Half Moon Cay is Carnival's private island with a nature preserve and bird sanctuary. While in Half Moon Cay, you can relax on the beach, go horseback riding, enjoy Carnival's Aqua Park where you can go down water slides, take a glass-bottom boat tour, or check out the stingrays at Stingray Cove.

After Half Moon Cay, you'll spend the next day at sea, and then the following day arrive in Bermuda. You'll stay in Bermuda until 6 p.m. the following evening, when you will then make your way back to Jacksonville with two full days of cruising. 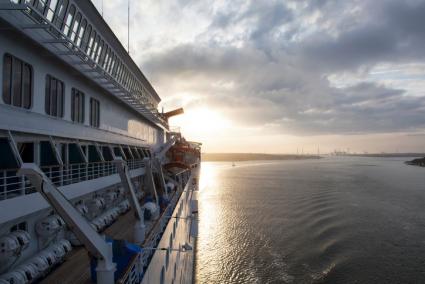 Carnival also offers a seven-night Eastern Caribbean cruise that includes stops in Half Moon Cay, Grand Turk (Turks and Caicos), and Amber Cove (Dominican Republic). Amber Cove is located on the Bay of Maimon, near Puerto Plata on the northern coast. This part of the island has over 60 miles of beaches. Some of the excursions you can opt for include Ocean World, where guests can swim with stingrays, dolphins, and sharks. Or, go horseback riding, swim the Damajaqua Cascades with 27 waterfalls, or just relax on the one of the beautiful stretches of beach.

When you're on Grand Turk, it's hard to focus on anything else besides the crystal clear waters and white sand beaches, but the island also has some stunning colonial architecture. Some of the highlights of Grand Turk include Pillory Beach, great for diving and snorkeling; the Turks and Caicos National Museum with Molasses Reef Wreck; and the Grand Turk Lighthouse, built in 1852. 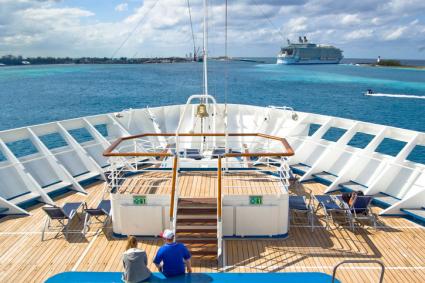 This five-night Bahamas cruise stops in Princess Cays after a day at sea. This private port of call is located on the island of Eleuthera. There's a supervised kids' area and the beaches are great for swimming, kayaking, and sailing. Next, you'll spend the following day in Nassau, which offers a variety of things to see and do. Head over and check out Atlantis, hop on a boat to a private island for the day, wander the shops and restaurants in Nassau, or go sailing and snorkeling for the day. 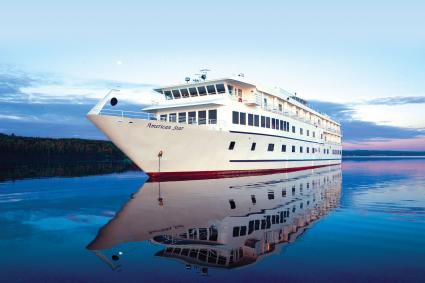 American Cruise Lines offers an eight-day/seven-night "Great Rivers of Florida" cruise that departs in Jacksonville from Amelia Island. On this journey, you'll follow the route of 19th century explorers. You'll start on the St. John's River, an American Heritage River that flows north; it's one of the few north-flowing rivers above the equator. Next, you'll travel to Palatka, known for its beautiful plantation homes, and the Ocala National Forest where you can observe manatees, alligators, and maybe even a see a bald eagle.

Green Cove Springs is another stop. The area is noted for its warm mineral springs believed to have medicinal qualities. The views along the Tolomato River on day five are stunning. Be sure to catch the onboard naturalist's talks during this part of the cruise. Next is St. Augustine, a destination where oil tycoon Henry Flagler's stamp is clearly noticeable. You'll find historic ruins, interesting architecture, and the reminiscent vibe of the "golden era."

This cruise takes place aboard the American Star. Accommodations range from single staterooms, ideal for solo travelers, up to the owner's suite which offers a hotel-sized bathroom, sitting area, writing desk, closet, and a private balcony.

This cruise takes place on the Independence ship, one of the ships with the most suites that have private balconies. It includes the same amenities as the Great Rivers of America cruise.

Getting to Jacksonville Cruise Ports

The Jacksonville Port, or JAXPORT, offers franchised taxi service and shuttle service between the cruise terminal and the airport. There are no rental companies at the port, but there are several options near the airport. Carnival Cruise Line offers shuttle service on the day of embarkation or debarkation for $22 one-way.

If you are driving, parking is available and can be paid in advance online with a credit card. Cash or major credit cards are accepted on-site as well. Parking costs are as follows:

There is handicapped parking on-site and directions are available on the JAXPORT website.

Amelia Island is home to Fernandina Harbor Marina. This marina is not only small, but devoid of the mass tourism you might expect to find. Instead, the area is home to mom-and-pop type shops and restaurants, no big chains or flashy stores. It's located about a 30-minute drive from Jacksonville International Airport and about a 45-minute drive from downtown. A shuttle service is available as well as Uber or taxi.

Finding a cruise out of Jacksonville is fairly straightforward with Carnival and American Cruise Lines both offering direct booking on their website. You can also check with discounters and aggregators like Vacations To Go or check for last minute cruise deals to see what discounts are available.