Cape Liberty is situated on a large peninsula located in the Bayonne Harbor. The port used to house the Bayonne Navy Base and facility. After the base was decommissioned, the public port opened in May of 2004. Since that time, some 320,000 passengers have traveled from the port to destinations around the world. This massive number of passengers has made Cape Liberty the second largest of all Mid-Atlantic and Northeast ports along the Eastern seaboard.

Royal Caribbean Explorer of the Seas

Explorer of the Seas is a 3,114 passenger cruise liner. This ship has 10 pools and whirl pools, and 15 bars, clubs and lounges. However, its most celebrated feature is its fitness and sport facilities.

Celebrity Cruises' Summit is a recently updated millennium class ship. New features include entertainment provided by Tony award winning entertainers who perform at the ship's Broadway-style theater, as well as what Celebrity calls "clean cuisine" in their restaurants, which include their brand new Blu restaurant and an i-lounge with Internet. 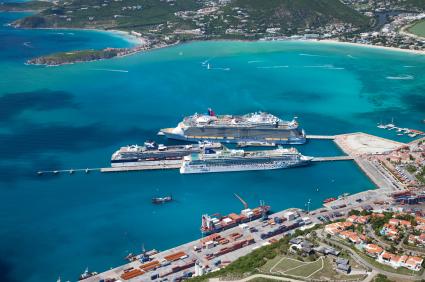 Celebrity offers the following cruises from Port Liberty from August 1, 2013 to December 31, 2013.

The port of Cape Liberty was first developed in 1930 by a private developer. The Peninsula, as it is often called, is man-made and juts off the eastern end of the city of Bayonne.

In 2003, Royal Caribbean International announced plans to develop the port, and it became the seasonal home port of the Voyager of the Seas. The maiden sailing of the ship took place in May of 2004. In 2010, the port began to offer year-round cruises to the Caribbean.

Cape Liberty is now one of the most northern ports to offer cruises throughout the winter season. Many passengers flock to Cape Liberty because of its location. The port is located just minutes from Newark Liberty International Airport and a short drive or bus ride from the southern tip of Manhattan. In addition, the New Jersey Turnpike makes getting to and from Cape Liberty very easy.

Cape Liberty does not currently offer the range of cruises that it has in the past, but since it's situated near the Newark airport, not far from New York City, it is one of the most conveniently located ports in the United States. If you depart from this port to sail to Bermuda, the Bahamas, the Caribbean or Canada, you will find an accessible, attractive port with stunning views of New York City.